Inspired by Our Story? Looking to…

Chris and Eve Kaplan-Walbrecht founded Garden of Eve organic farm in 2001, dedicated to providing delicious organic vegetables, fruits and beautiful flowers and to “making changes in the world by living them.”

Chris grew up on a dairy farm in upstate New York. He spent ten years in the world of clean water advocacy, working as an organizer and manager for the nonprofit group Citizens Campaign for the Environment. He graduated from SUNY Cobleskill with a degree in Geology.

Eve worked on horse farms and had a vegetable garden as a kid, and always sought to spend most of her time outdoors. While starting the farm, Eve worked as a land preservation advocate with the North Fork Environmental Council and as Principal Planner for the Town of Southampton. She holds a BA from Harvard in Environmental Science and a MS in Conservation Biology and Sustainable Development from the University of Wisconsin, Madison.

Chris and Eve met in 2000 and together they started a large garden on about 1/4 acre of land in Riverhead, Long Island which they worked together on evenings and weekends after coming home from their full-time jobs.

Invited to sell some extra produce (zucchini!) at a local farmers market they made $40 and were launched on their farming careers.

Since then they have expanded and now grow 50 acres of certified organic vegetables, flowers, raise 1000 pastured laying hens, and oversee almost 20 farm team members. Garden of Eve sells produce through an on-farm Farm Market, 4 farmers markets, and nearly 1,000 households participating in their Community Supported Agriculture (CSA) programs at 20 locations in New York City and on Long Island. Forest Kaplan-Walbrecht in 2005 and Shira in 2007.

You can find out more about the farm and CSA at www.gardenofevefarm.com.

Forest was born on June 19, 2005. He helped his baseball team win the Sectional division of the Little League World Series for the first time in Riverhead’s history. He’s now finishing up high school and will be heading to college in the fall of 2023

Shira was born on June 8, 2007. She loves gymnastics, cheer, and horse-back riding. She is in High School.

Get a Taste of Garden of Eve

How do I know that Garden of Eve produce is organic? 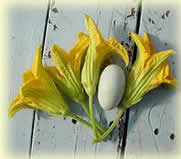 At Garden of Eve Farm, we operate as sustainably as possible, and grow an incredible diversity of plants. We have 70 varieties of vegetables,20 varieties of herbs, and 30 varieties of flowers. We use NO poisonous pesticides or herbicides. Instead we rely on plants’ natural defense systems and ecological solutions to solve pest problems.

As environmental advocates, we try to walk our talk and create the changes we want to see in the world through our choices on a daily basis.
We are different from many typical farms, which are based on the practice of monocropping – growing many acres of just one crop. Single-crop farms often rely on large amounts of chemical pesticides and herbicides, which have been shown to increase the risk of cancer and to cause other chronic health problems. You’ll also notice the difference when you taste organic! Our produce has deliciously intense, sweeter flavors than conventionally grown produce.

How do I know that Garden of Eve produce is organic?

Use of the term “organic” is now defined and regulated by the Department of Agriculture (USDA). The fact that we are “Certified Organic” tells you that we have gone through a very rigorous certifying process conducted by the Northeast Organic Farming Association and USDA. We have proven that we use no synthetic herbicides, fertilizers, or pesticides, that we use cover crops to enrich the soil, and are good stewards of our environment.

When you purchase an organic product you are paying to protect your own water, air, and soil. You are paying the real environmental and human cost of producing food in this country, not an artificially low price that doesn’t include the future costs of health bills and environmental degradation from the toxic chemicals that are used.
You are paying farmers a living wage to work from sunup to sundown growing your food for you, instead of driving farmers to bankruptcy as is the case in many agricultural industries today. Finally, you are paying for more nutritious, better tasting, and healthier fruits and vegetables.
Much of the USA’s large-scale agricultural production is sold artificially cheap because of huge government subsidies – your tax dollars going into the pockets of giant agribusinesses, not farmers. Unlike on small farms, agribusiness is highly mechanized and consumes vast quantities of fossil fuels. These farms are putting toxic chemicals into your air, your water, and your soil so that they can produce cheap food now, but we all pay the price later on.
However, compared to other sources of organic produce, we offer a great value and make sure that our CSA members always receive more produce than they have paid for per week, compared to buying the same organic products in a store. 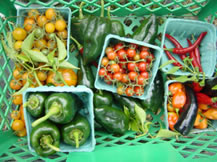 More and more studies show that not only does organic produce taste better, it is actually better for you. Why? Not just because it doesn’t have residues of toxic pesticides and herbicides, although that’s a good start.
Organic farmers don’t use petroleum-based fertilizers that act like “plant cocaine”, making vegetables grow unnaturally fast and large. Organic vegetables grow more slowly so they take up larger quantities of minerals and nutrients from the soil.

Americans spend barely 10% of their annual income on food, while Europeans spend on average 25%-30%. We are one of the most obese nations in the world. Do you see the correlation? If good healthy food isn’t worth your money, what is?

Join our newsletter to get the latest news right to your inbox.

Visit us on the East End of Long Island, where the North Fork wine country begins in Riverhead NY, about 80 miles from New York City.
If you’d like to visit, volunteer, or work on the farm, please contact us.

The Community Supported Agriculture (CSA) Program at Garden of Eve Organic Farms allows you to purchase advanced shares of fresh fruits and vegetables from each season's harvest. A great way to eat healthier, avoid toxic chemicals, and support a local farm you can visit.